Throw to your target, the ballnoons will blow once touch them, you get one point. Or you put some paint in it.

Suppose you thought playing basketball without a ball is impossible, you're going to like this variation. However, it’s more straightforward than you thought: form two groups and let every member slam dunk an inflatable into a water bucket. A scoring team wins while the less successful group gets wet because winners can now throw inflatables in a fight.

If you didn't want to reveal all of your truth, stay away from this competition. You have to get the guest to confess the deepest secrets and if not, everyone can bombard the secretive member. A person may only defend themselves with hands or finally spill the truth.

Choose your forward and gather a group of people whose goal is to physically avoid getting wet by an inflatable. The only way players can avoid getting wet is by being fast enough to dodge the ball. Whoever stays last without getting touched by inflatable scores in the game.

Let your guests form two groups and let each one of them hide with an arsenal of inflatables. The goal of the group is to find and splash the enemies. On the other hand, the other group has to either hide or attack the enemies. This one is easily among the top water balloon war games to play.

You can invite as many people as you have chairs, but the aim is to put one chair less than there are people in the room. The moment the music stops, your guests have to find a seat in sit on the chair ASAP. However, this competition has a plot twist because each chair has an inflatable scotch-taped to it, so no way to avoid getting your butt wet.

The game will be perfect for the end of the evening when everybody expects presents. Use non-transparent balloons to hide either small presents, sweets, or water inside your balloons. Whoever is hitting the ball has no idea what they will get, a gift or a ruined hairstyle.

It’s among the best water balloon games for bigger events. All you have to do is to recreate a usual volleyball round, but with water inflatables. Although you can not hit the ball because it might burst, you may still hold it and quickly throw it away. A team whose ricochet led to the inflatable pop loses.

It is one of the coolest water balloon relay games. The aim is to form two groups, give them an inflatable while each one has to press between chin and neck. You need to pass the inflatable pressed under your chin with no hand action. Other guys are not allowed to pass with their hands either.

One of the best water balloon toss games for sure. All you have to do is cover the eyes of one person and ask them to toss the ball around. This is for sure much more fun than playing a toss game with your eyes open.

To make a child's party fun, all you have to do with water balloon games is to make them safe for kids. Here are the best ones for your kid and their friends:

Children will adore playing hot potato. All you have to do is fill one inflatable with water, puncture it so that water can get streaming. The game rules resemble the usual hot potato, but this time your hands will be wet because of the water leaking.

Fill inflatables with food coloring inside and let kids burst the inflatables with something sharp (but only with adults' assistance.) Finally, children should have colorful splatters that look like figures.

Place at least two dozen inflatables on the ground. Ask kids to pick up all the water inflatables and put them in the basket.

Hide a bunch of non-fragile gifts in a balloon and ask kids to stomp on them, revealing presents.

Place a paper or a carton star at the center of the yard and let kids trot away for a couple of meters. Now they have to throw the latex toy. Whoever gets the inflatable closest to the star wins the race. 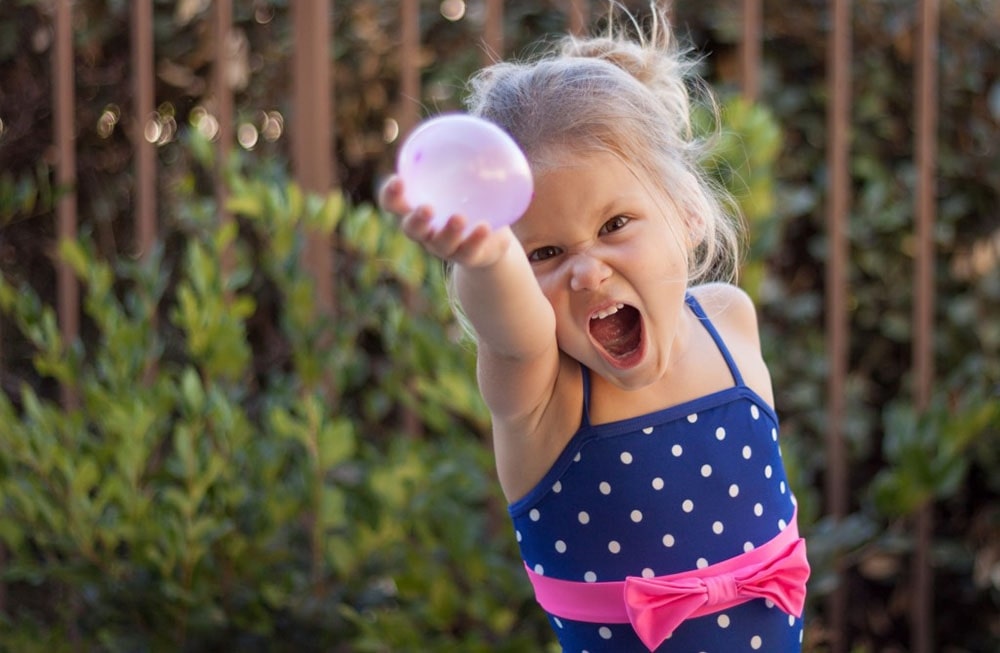 Water balloon party games for adults sure can be fun. All you have to do is use your imagination. Here we present the coolest variations of adult water inflatable competitions:

Who said that inflatables are meant to be filled with water specifically? Creatively serve shots by placing small latex toys filled with vodka or tequila flowing in a huge bowl. Everybody gets an instant shot inside of an inflatable.

Now you can randomly fill your latex toys with all kinds of liquor and let the guests bite into the latex to burst it and guess the drink inside. The only note is that your inflatables have to be non-toxic and FDA-approved.

If you want to reveal someone's secrets, prepare a list of provocative questions and invite all of your guests over. Each guest has a note with a quiz and asks a volunteer. If they refuse to answer, a water-filled latex toy has every chance to be a secretive person's face.

With this one, you find a lightweight object each guest will hit with a water latex toy to win a prize. The most accurate shooter receives the main gift. This game resembles darts or a shooting gallery, but without dangerous darts or rifles.

This competition might seem ridiculous but will be fitting if you have a pool party. Choose two couples and let the guy hold a latex toy filled with water between his legs. A girl has to pop the water-filled inflatable with her butt. This is a fun competition that will make everybody laugh.